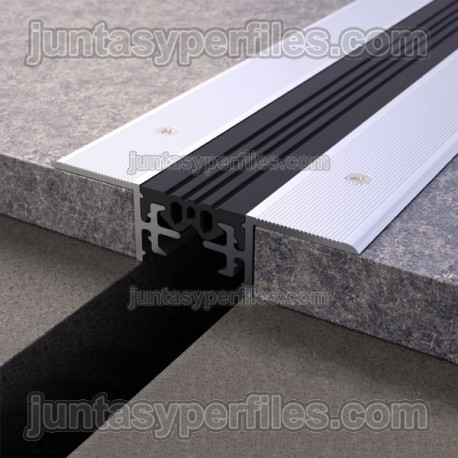 FREE SHIPPING
Free shipping costs for orders over € 100. Valid for Spain *, Andorra and Portugal *. (* Peninsula only)

SHIPPING IN 48-72 HOURS
We ship all over Europe. Orders received during the day are normally dispatched the next day, to be delivered in 48-72 hours in the Peninsula once they have been dispatched. (Business days from Monday to Friday)

MORE THAN 20 YEARS OF EXPERIENCE
We advise and solve your doubts before, during and after making the purchase, so that you can guess and enjoy your product.

BUY WITH CONFIDENCE
100% safe and protected, you can pay by Card, Paypal and Transfer.

SATISFACTION GUARANTEE
You have 15 days to return your purchase if you are not completely satisfied and 2 years warranty on all our products.

Preformed structural expansion joint made up of two aluminum profiles and a high quality EDPM rubber central body, intended to cover the structural joints in an overlapping way. Its installation is carried out after the installation of the final pavement.

The Novojunta Pro Non-slip design allows to relieve the stresses derived from thermal variations, avoiding cracks and other types of damage to the pavement. Its components have been designed giving slip resistance coefficients suitable for all types of traffic. The fixing wing has countersunk holes for its perfect coupling with the recommended anchoring hardware. It has capacity for light loads.

Available in matt or natural silver. 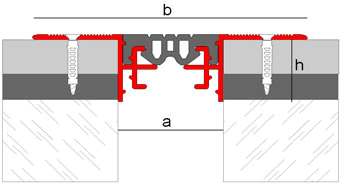 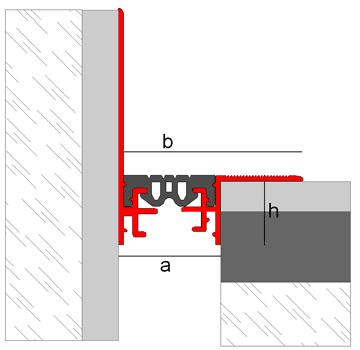 Buildings and construction elements are subject to deformations and geometric variations. The arrangement of expansion joints helps to reduce the effects that these variations have

over the whole building, preventing the appearance of pathologies.

The CTE (Technical Building Code) in its DB-SAE (Building Actions), establishes that in concrete or steel buildings, expansion joints will be arranged so that there are no continuous elements of more than 40 m. of length.

Novojunta Pro Anti-Slip is a solution for structural joints formed by an anodized aluminum structure and a high-quality rubber central body. This profile absorbs the stresses and deformations produced in the construction elements, preventing the appearance of cracks or other pathologies. It can be placed vertically and horizontally on both floor and wall tiles. The aluminum of the structure is Qualanod certified, allowing it to be installed outdoors or indoors, guaranteeing high resistance and durability. The central rubber can be exchanged after its useful life, also prolonged.

Novojunta Pro Anti-Slip has a grooved face that gives it anti-slip properties, ideal for installation on flooring. This profile is capable of supporting light load traffic.

Novojunta Pro Antideslizante is a profile made by extrusion of aluminum. The matte silver finish has been anodized, mainly improving through this process its resistance to corrosion, mechanical resistance and appearance. The anodizing carried out has the Qualanod quality seal, which guarantees the quality of the process and the resulting profiles. This seal regulates appearance and color tests, thickness measurements, sealing and impregnation control, resistance to abrasion, light fastness, acetic salt chamber and nitric acid immersion.

Aluminum is a material with excellent chemical and physical-mechanical properties. It is light, tough, ductile, malleable and highly durable. Its resistance to corrosion and fire is very good.

Aluminum is a highly valued material and used in various sectors, especially in construction.

Its transformation processes are multiple, so that very different geometries can be obtained with high performance. It is a recyclable material.

The central body of Novojunta Pro Antiskid is made of high quality EPDM. EPDM is an elastomeric polymer with excellent mechanical properties. It has good resistance to abrasion, wear and impact, it is a good insulator, it resists the elements and the most common chemical products, and its working temperature range is wide.

Its excellent recovery after compression is key in the absorption function of the deformations and geometric variations of the construction elements.

It allows category F traffic according to ACI Standard, American Concrete Institute ACI 302.1R-89 and ACI 360.1R-92, for light vehicles weighing <= 30 kN and <= 8 seats, not counting that of the driver.

Classification trucks FL1 according to ACI Standard, American Concrete Institute ACI 302.1R-89 and ACI 360R-92, with pneumatic or rigid wheels with a net weight of 21 kN and load of up to 10 kN. It allows static overload of less than 1t / m2 and the passage of vehicles on pneumatic wheels of less than 1t / axle, as classified as light loads on screeds according to NTE-RSC.

Linear and centered load of 0.5 kN.

This classification has been obtained from Standards ACI 302.1R-89 (Guide for concrete floors and construction slabs - American Concrete Institute - in reference to the classification of the magnitude of the load it can bear) and ACI 360.1R -92 (Design of the grades of floors, which describes the six common types of flooring for construction and refers to the actions induced by trucks and transport vehicles) and the classification of trucks (based on net weight, dimensions and cargo it carries).

The Novojunta Pro Non-slip model is supplied pre-assembled for easy installation. This profile has been designed for installation after the completion of the pavement or cladding, being placed on top of it.

The recommended anchors are dimensioned according to the stresses that the joint will have to support during its useful life. If you choose to use an alternative anchor, you should take it into consideration.
Novojunta Pro Antideslizante must be placed in joints of the same width, never in joints of greater width.

This profile has a design in line with that of Novojunta Pro Non-Slip, making it the perfect complement for meeting areas with construction elements and perimeter areas.

Cleaning should be done periodically with a soft cloth. If you choose to use a neutral cleaning liquid, it should be rinsed with cold water and dried to remove excess moisture. Stubborn soiling can be removed with suitable mildly abrasive cleaning agents. If you apply a preservative, in addition to leaving a thin layer of water repellent, keep in mind that it should not be yellow, attract dust or dirt, or have iridescent effects.

The use of steel wool, abrasive or pickling products as well as strong acids (hydrochloric and perchloric), strong bases (caustic soda or ammonia) or carbonated solutions is not recommended. Citric acid should also not be used as it dissolves the protective oxide layer on the aluminum surface. Waxes, petroleum jelly, lanolin or the like are not suitable. Haloalkane solvents (hydrofluoroethers or chlorinated solvents) and setting accelerators containing chlorides should be avoided (use non-chloride accelerators).

No customer reviews for the moment.

22 other products in the same category: